On the 14th June, 2021, yesterday, at about 13:32hrs in the afternoon, Commandant Ayeni Paul Kolawole MSC FCSS, officially, handed over the mantle of leadership, of the Nigeria Security and Civil Defence Corps (NSCDC) Lagos State Command to Commandant Eweka Edenabu Douglas Okoro MSC, who was newly posted to the Command, following the four cardinal points of the Commandant- General Nigeria Security And Civil Defence Corps, CG Ahmed Abubakar Audi Phd mni, which are to rejig, revamp, reinvigorate and reposition the corps to take its due place in the security architecture of our nation. He has served in various capacities and locations and he was the Commandant Ondo State Command, before his new deployment as the Commandant Lagos State Command. His wealth of experience, wisdom and knowledge, in the service, will be brought to bear as he carries on with the affairs of the command.

The official handover was done at the parade ground of the Lagos State Command in Alausa, Ikeja, Lagos. It began with an opening prayer from the Command’s Chaplain, Assistant Superintendent of Corps I (ASCI) Agu Maduabuchi.

The Public Relations Officer of the Lagos State Command, Assistant Superintendent of Corps I (ASCI) Abolurin Oluwaseun Olumide anchored the historic event with great delight. He rolled out the agenda for the historic event, without mincing words and he proceeded, with the activities professionally and accordingly.

Commandant Ayeni Paul Kolawole gave his handover speech accordingly. He thanked the Almighty God for a successful and crisis – free time in office. He also appreciated the Commandant – General, for the rare opportunity given to him to serve in the state. He as well sent his heart- felt gratitude to Lagos State Government and the Lagos State Security Trust Fund, for their support during his time in the state. He also didn’t forget to thank all officers and men of the Lagos State Command who worked assiduously with him to ensure a peaceful and successful administration. He emphasised that in life change is inevitable. He charged Officers to remain committed and supportive to the new Commandant the same way they have done to him. He also prayed for the new Commandant to succeed beyond measure.

Thereafter, Commandant Ayeni embarked on the official handover of documents containing details and essentials of the Command along side with the staff of office, to the new Commandant, Commandant Eweka Edenabu Douglas Okoro, which symbolised a change of baton and leadership.

In the same vein, in response, the new Commandant, Commandant Eweka Douglas Okoro MSC, also immitated the outgoing Commandant to say that the only thing that is permanent in life is change. He said that Commandant Ayeni is a role model, a senior officer of repute and he has done so much in the service. He appealed to officers and men of the command to extend to him, the respect, mutual support and cooperation they gave to the outgoing Commandant. He said that Lagos is like home for him, following his tertiary education from the most prestigious University of Lagos, where he bagged his Bachelor of Science (BSC) in Accounting. He also admonished officers against ill- feelings and charged them to rather rededicate themselves to the statutory functions and duties of the corps, with the passion and to pursue it rigorously and vigorously and bearing in mind the love for our country. He affirmed that he is ready to serve his fatherland and that all officers should join hand with him to do so.

Finally, Deputy Commandant Paul Shomide, Head of Administration, in the Command, gave the vote of thanks. He wished both Commandants good and sound health and many more successes in life. However, the historic event came to a halt with a closing prayer from Deputy Commandant Suleiman Agboola Jimoh, Head of Operation, at about 14: 37hrs, in the hot afternoon. 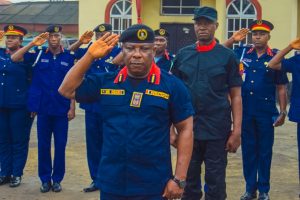