Facts have emerged from the Police in Delta State Command that no life was lost in Tuesday’s accident involving a vehicle in the convoy of the Chief of Staff to President Muhammadu Buhari, Prof. Ibrahim Gambari during an inspection visit alongside the Minister of Works and Housing, Mr. Babatunde Raji Fashola to the Second Niger Bridge in Asaba, Delta State capital which is under construction.

One of the vehicles in the convoy was said to have plunged into a ditch injuring at least four security operatives during the accident.

Gambari alongside the Minister of Works and Housing, Babatunde Fashola; and his counterpart in Labour and Employment, Christ Ngige, were in Asaba on Tuesday to inspect ongoing works at the bridge when the incident took place.

The Spokesperson for the Delta State Police Command, DSP Bright Edafe told Oki Samson, President of the National Association of Online Security News Publishers, NAOSNP on Wednesday that there was no lost of life resulting from the “minor accident” involving one of the backup vehicles conveying security operatives.

Edafe further explained that the picture being painted in some section of the media about the accident is not correct and misleading, insisting that it was minor and no life was lost.

“Four policemen were reportedly injured in the accident that occurred on Tuesday evening after the inspection.”

The driver of one of the security vehicles conveying operatives lost control and crashed into a deep pit while trying to maneuver it way resulting in the incident.

But findings by NAOSNP revealed that four of the injured policemen sustained different degree of injuries forcing some members of the convoy to rush the victims to hospital in Asaba.

It was not clear at the time of filing this story on Wednesday if any of the victims lost their lives to the accident.

Earlier, an eyewitness, John Okorie, had told The PUNCH that the incident occurred when the vehicle conveying the victims was negotiating the bend leading to the construction site of the Second Niger Bridge in Asaba.

“The policeman driver was speeding and while negotiating the bend because of the speed could not control the vehicle. They crashed into a deep pit. I was at the back of the convoy, driving slowly.

“With the help of other people, we rescued four of them but they were badly injured,” the source told the medium.

He was, however, quick to add that no life was lost to the unfortunate incident on Tuesday. 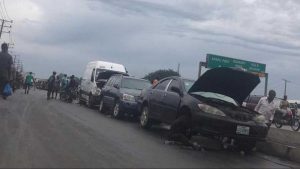