In line with the renewed and re-invigorated efforts of the Commandant, Nigeria Security and Civil Defence Corps (NSCDC), Lagos State Command, Commandant of Corps (CC) Edenabu Okoro Eweka, msc, acma, cna, against all forms of economic sabotage and other kinds of criminality in Lagos State, the Anti – Vandal Unit of the Lagos State Command, ably led by its Head of Unit (HOU), Assistant Commandant of Corps ( ACC ) Musa Abdullahi Jibrin has intercepted a wooden boat, on the high sea, at Ilekan, around Ajah axis, loaded with blue and yellow kegs, containing about twenty four thousand, five hundred litres of product, identified, to be Premium Motor Spirit (PMS) also known as petrol. The products were suspected to be conveyed to the neighbouring country, National Association of Online Security News Publishers, NAOSNP can report. The oil thieves were nabbed by the officers and men of NSCDC who were on routine surveillance and patrol at the wee hours of Monday, 17th October, 2022.

In a press statement by the Corps’ PRO, DSC Abolurin Oluwaseun Olumide released to NAOSNP: ‘The suspected stolen PMS, is estimated to be over four million naira only, at market value’. The two suspects paraded were Olorunwa Sunday and Friday Bolaji alongside the exhibits.

Speaking on the gallant efforts of his men, Commandant Edenabu Okoro Eweka affirmed the Command’s unflinching commitment, towards eradicating all forms of economic sabotage. He also dedicated the recent operational successes of the Command to the supply of logistics from the NSCDC, National Headquarters, as at when due, especially, the new gun boat and vehicles recently, deployed, to the Lagos State Command, by the erudite and amiable scholarly, headship of the Corps, Commandant General (CG), NSCDC, CG Ahmed Abubakar Audi, PhD, mni, OFR.

Present at the parade of the suspects yesterday at the Ijora Jetty were the Deputy Commandant of Corps (DCC) Jimoh Olusola, ACC Musa Jibrin, DSC Abolurin Oluwaseun and other gallant officers and men. 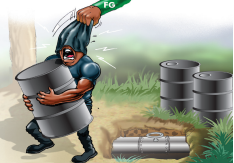